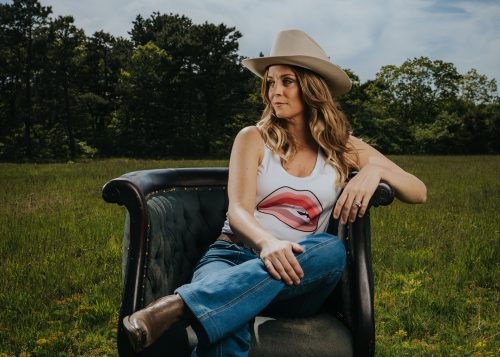 In 2017, Quitman native now from Cape Cod, Monica Rizzio stepped on our stage and, in a sold-out homecoming concert, played a show ranging from Americana Roots to a little bit of country featuring cuts from her CD “Washashore Cowgirl”! Now she’s coming back – April 18, 2020! The locals call someone who moves to Cape Cod but was not born there a Washashore. This young Texas girl barrel-raced on Pleasant Valley Ranch here in Wood County and had never seen the ocean. So when Monica Rizzio crossed over the iconic bridges of Cape Cod in 2004, she instantly became the Washashore Cowgirl.

In 2013, she purchased a 1956 Martin O-18, named it Bo, and plugged in. For the next few years she started playing with a bunch of salty, accomplished Cape Cod musicians who helped bring back the cowgirl attitude and inspired her to write about her sometimes humorous, sometimes tear-jerking journey from Texas, love, and heartache – music you’ll hear in her show and music that has driven all sorts of awards including a nomination for best country album.

Monica also founded the “Vinegrass Organization”, a not-for-profit music production company. Their mission is to provide scholarships and instruments to students studying music at an accredited 4 year university, with preference given to study within the American Roots genre.